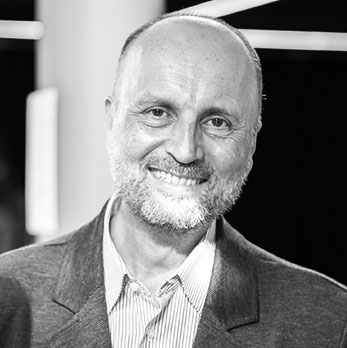 "Creating dialogue between two cultures: technology and the positive economy."

"I believe in the power of encounters. So I facilitate them.”

Yann Mauchamp connects people from the technology sector and the positive economy — two cultures that don’t necessarily know how to talk to each other — and raises their awareness about the immense benefits they can gain from working together, both for themselves and for our world. It is no coincidence that he named his company MutualBenefits.

An incredible thing called the Internet

Yann doesn't believe in boxing people in, probably because he values freedom so much. In the mid-1990s, the young experimental film and music maker turned his attention to the early innovations made possible by computing. An industrial group sent him to the United States to explore emerging technologies like VR and online games. "There, I discovered an incredible thing that allowed people from around the world who had a passion for anything at all to gather in shared virtual spaces where they could exchange and encourage each other. My dream of an infinite, worldwide community had been fulfilled, and its name was Internet.”

When he returned, Yann shared the results of this experience with his boss, who then put him in touch with two engineers. The three of them went on to create Club Internet, one of the first ISPs in France. Yann then started working on a financial information startup called NewsAlert — a daring fintech bet he made at a highly speculative time — which he scaled onto the European and Asian markets. But the dotcom bubble burst in 2001 brought his momentum to a halt. The nearly fifty people he had recruited just a few months earlier lost their jobs, as did he.

The bubble burst provided an opportunity for Yann to reflect on his next steps. Around the same time, an 18-month illness led him to change his lifestyle and revisit his priorities. He came out on the other side with a different relationship with himself, others, work, and life.

"I’m fortunate to have been able to build a network of exceptional people from the very start.” Yann knew that he wanted to help others. So he created a company that would provide the service and support early-stage entrepreneurs needed to achieve independence. He envisioned a collective of entrepreneurs, experts of the digital economy, who had neither shareholders nor employees and were at the stage in their development where frugality and agility were absolutely vital. He wanted to break the bonds of subordination and dependence and build his professional relationships on a foundation of altruism. A few years earlier, Chinese partners he worked with had said they “welcomed the long-term mutual benefits" of their relationship with Yann. “MutualBenefits” would be the name of his new company, with the .net to emphasize that the network was key.

From tech for money to tech for good

Fifteen years later, he was co-managing more than 350 projects, recruiting experts and managers to help European technology companies scale, grow, get agile, or pivot. When they needed help with international market product-fit, market entry strategy, country management recruitment, team building, coaching, localisation, ecosystem building, and more, Yann found the specialized expertise to meet their needs. The master recruiter became a recruiter of masters, increasingly broadening his focus to include startups active in the social solidarity economy. He attended the events that mattered, with an emphasis on those related to sustainable development goals (SDGs), climate action and the impact economy.

So Yann is a headhunter, right? Well, he’s not a big fan of the term. "‘Headhunting’ is not my favorite word to describe what we do. The heart and body are as important as the head these days. ‘Talent scouting’ might be a better term. But finding the best candidate for a dream job is only a small part of our work. We are primarily known for our ability to advise both companies and talent. MutualBenefits has evolved into an international network of impact growth partners who are actively involved in the positive and responsible economy.

Yann worked for years in a “tech for tech” and “tech for money” world. Today, however, it's “tech for good” that interests him, as well as the talented people he interacts with every day. "I don't turn away companies that are not yet contributing to the UN's SDGs if they treat their stakeholders fairly and compassionately. After all, who am I to judge? I’m more interested in encouraging people to explore what they think is the right fit for them” says Yann. We’re not about “coolness” or “happiness officers,” or other Unicorn gimmicks. We want to strike a balance between the Zebra and the Unicorn and are looking for companies that want to work with free people in their efforts towards creating a more sustainable economy.

Today, Yann’s network includes a growing number of engineers and executives who want nothing more to do with profit-hungry, extractivist companies — whether it’s minerals they’re mining, or your personal data — that continue to ignore the world's most pressing problems. Three years ago, people with these convictions represented about 10% of the talent he worked with, and it soon reached 15%. The number continues to grow every day and includes people of every generation.

Take Cédric Roux, whom Yann met in 2019. A major player in the solidarity economy had referred him to Yann as “someone exciting, but too expensive.” Too expensive compared to what?" Yann wondered. To the maximum salary that he was willing to pay? Surely, he could afford him, considering he’d just raised millions... What was the problem, then, and how can we solve it?

The obstacle, it seems, is the full-time, exclusive salary model. But there are much more creative ways for companies to have access to exceptional talent. MutualBenefits embraces a flexible freelancing concept in which an expert’s contribution to projects and organisations can take many forms: coaching, recruitment, freelancing, or setting up their own project. They can combine salaried employment, project-based contracts, and freelance activities. Anything is possible. Once our needs have been met, we work with our experts to find the best solution for them..

Enabling dialogue between technology and the positive economy

When Yann contacted Cédric, the logic of this approach immediately resonated with him. Over hours of discussions, they came up with a new MutualBenefits model: "We want to provide support to brilliant people who feel disengaged and out of sync with their work, and to help them contribute to organisations doing meaningful work.”

"We meet more and more tech and business geniuses every day who want to join impact organisations. But these two worlds don't talk to each other enough, nor do they speak the same language. Because MutualBenefits speaks the language of both cultures, we can facilitate dialogue between them. We want to move from monoculture to permaculture, to show that this trend is happening everywhere, not just among the self-taught and dreamers, and to encourage talent to come out," Yann concludes. Our goal is to see individuals and companies communicating with each other, creating new opportunities, and becoming the supports and interfaces of a network that will continue to grow, for the benefit of us all.